Downtown Amman; lying between the hills of Jabal Amman, Jabal al-Weibdeh and Jabal al-Qal’ah, this area is like a boiling kettle of busy streets with its numerous clothing-, perfume-, spice-, and jewellery-shops, as well as juicebars, restaurants, markets, and people going in every direction. Everywhere in Downtown, someone has something to sell you for a good, or maybe not so good, price. Central in Downtown is the King Hussein mosque with its tall minarets, its spacious square in front and its location next to the foodmarket, the souq, where I buy most of my food. All day long, cars and trucks are passing in front of the mosque on a wide road that cuts through the area like a dull nerve. Emissions from the many cars lie thick in the air. Crowded and noisy, but always with a good atmosphere, the souq seems to be the epicentre of all Downtown activity. Primarily vegetables, but also other kinds of goods, are stacked up everywhere, there’s not an empty spot anywhere, and the salesmen are shouting their prices in a competition to get the most attention from the customers. The impressions you get here almost makes you feel the need of taking a deep breath before entering, but when you are standing under the white canopies, you love the vibrancy. 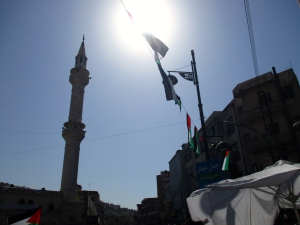 This is pretty much my impression of downtown Amman all week long, from day to night. Except from one day, Friday. In a couple of hours around noon all the usual hassle disappears and the usual volume is turned down to a minimum. What is happening?

Well, in Jordan and in the rest of the Arab world, Friday is holy and people are off from work. The Friday prayer is considered to be something special and actually the Arabic word for Friday – Al Jummah – comes from Al Jam, which means “gathering”. This still makes sense to this day when you witness the prayer at the King Hussein mosque. The last two weeks I’ve been in downtown just around the time of the prayer at noon, and the sight of the many men praying in congregation is something special. Everybody is standing in well-structured, straight lines in front of the mosque, each with their own small prayer rug and their shoes taken of. Because so many are showing up, people also stand in the middle of the road and on the sidewalks. The delightful consequence of this is that no cars are allowed to travel the road in front of the mosque. It’s a strange sight because the road is usually very busy and filled up with cars that you have to go between when you cross the street, because they don’t stop unless you go out in front of them. The result of this being peace and quiet in a part of the city that is usually filled with cars and the smell of their emission all day long. When the prayer begins, the atmosphere is peaceful and calmness surrounds the area. The ritual contains a number of different actions and movements, to put it very simple: the imam recites parts of the Qur’an and the men change from standing in upright position to bowing, prostration and sitting in different combinations while praying at the same time. Even though you’re not a part of the prayer yourself, you sense a feeling of cohesion among the praying men that inflicts on you when you walk by.

Afterwards the crowd splits up. Most visible is the pro-Palestinian demonstration that develops in the crowd in front of the mosque. It’s a weekly tradition following the Friday prayer, to see people gather to show their discontent with the Israeli occupation of Palestine. The Palestinian flag is waving and slogans are flying in the air, it’s mostly young men wearing the black and white keffiyeh who are participating in the demonstration. Even though Jordan is a peaceful country in general, and the atmosphere on Fridays makes it appear even more peaceful, the awareness about the political in Jordan’s neighbouring countries still manifests itself occasionally; mostly it’s in the daily discussions though. Especially the conflict in Palestine is present in Jordan, since approximately half of the country’s population is of Palestinian origin.

At the same time as the demonstration takes place, some men instead go to the souq to buy food, while others go to the juice shops along the streets and talk in small groups. A lot of people return home, since Friday is also devoted to spending time with family. Slowly, people go back to their daily business, many shops open again, and Downtown begin to return to its usual condition, chaotic and lovely as we know it. 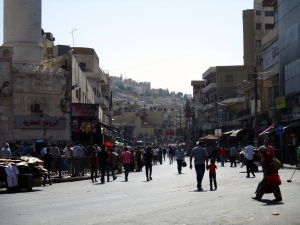